I still haven't gotten over how lucky I was to have won the first part of Diane's Holiday Giveaway. Now here she goes again, putting up for grabs the most amazing prizes. Any makeup junkie is sure to bawl over them!

Unlike the first part where there's only one winner (and yes, that's me!), this time there'll be three lucky recipients of three different sets of prizes. Part Two is also open internationally, so anyone across the globe can join. (That'll be more entries for me to compete against, though. Har!)

Now stifle that scream as we take a look at the prizes. 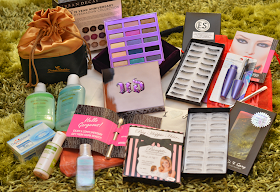 No, this is not a dream. What you're seeing is really Urban Decay's 15th Anniversary Palette. And it's telling me I should join this giveaway so I can take her home. LOL.