One love, one heart... let's get together and feel all right!
So goes Bob Marley's epic song 'One Love'. I can't help but hum this song to myself each time I hear or read of stories about people coming together to help even more people in need.

The Tattoo Village is part the company’s rehabilitation initiatives coming from the aftermath of typhoon Yolanda. Now holistically referred to as Project Wonderful, the rehabilitation initiative is part of a unified platform for the company’s brand, culture, and nation-building efforts.
As Globe President and CEO Ernest Cu said, “The official unveiling of the Tattoo Village testifies to our dedication to spark hope and progress for the country. Globe is going beyond providing relief assistance to affected communities and instead move towards initiating sustainable efforts like building homes and providing livelihood opportunities, so we can help create a wonderful world for our fellow Filipinos in need.”
As a response, Tattoo pooled its resources resulting to a P15M grant to Gawad Kalinga to aid in rebuilding homes for 100 families. Together with the initial donation, another P1.2M was raised through a charity dinner hosted by Cu, his wife Arlene, and Ronquillo, attended by Tattoo’s brand ambassadors, business partners and friends from the media. The broadband brand also brought its brand ambassador Bamboo to Brgy. Tambulilid last December led by Globe Vice President for Tattoo Home Broadband Business Jurist Gamban, bringing with them truckloads of toys for children in time for the Christmas season. 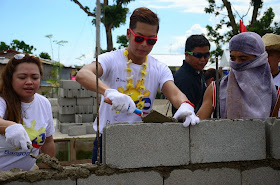 Project Wonderful ambassador and long-distance advocacy runner Mac Milan also played his part at the event by bringing with him the toys he collected from his fundraiser runs. Milan is gearing up to add a toy library that will benefit the children of the Tattoo Village. The Toy Library aptly called ‘Aralaruan’ consists of educational materials suited for kids of different ages.
Divided into different groups, Globe executives led groups of employees and friends from the media on various activities throughout the Gawad Kalinga build. Each one had a chance to experience hardworking tasks that included house painting, hollow block laying, hollow block making and sand sifting.
For over 10 years, Globe Telecom has fortified a successful partnership with Gawad Kalinga. Fundamentally anchored on a common calling to uplift the lives of marginalized Filipinos, Globe and Gawad Kalinga have supported each other and banked on their respective strengths to be able to build and support communities, especially in times of great need or rehabilitation.