Unwrap Hope | Bamboo and Tattoo Home Broadband give smiles to children of Ormoc.

Ever wondered what your favorite stars and celebrities do during Christmas and the New Year? Here's a peek at how rock icon Bamboo celebrated the holidays.

Tattoo Home Broadband together with celebrated rock icon Bamboo gave the children of Brgy. Tambulilid Elementary School in Ormoc, Leyte plenty of reasons to smile with gifts of toys in time for Christmas.

A fitting finale to a successful run of Bamboo's Christmas concert Believe: Christmas at Home with Bamboo, the concert became the prime vehicle to be able to collect over 2000 toys for the benefit of the kids in the said barangay. After the onslaught of typhoon Yolanda, Tattoo, through Globe Telecom's Bangon Pinoy program, gave its commitment to restore and rebuild 100 homes in Ormoc, in partnership with Gawad Kalinga. And with the holiday season Tattoo chose to give importance to the children of the community who were left most vulnerable after the calamity.

Everyone who wanted to watch the concert purchased toys in exchange for the tickets. On the other hand, those who simply wanted to share a simple Christmas message posted their video greetings on Instagram with the hashtag #UnwrapHope. Each video post was also equivalent to a toy that Tattoo donated on their behalf. And as a special treat, a creative selection of these videos were compiled and revealed during Bamboo’s concert.
Following the collection of toys was the gift wrapping activity held at the Globe Tower where employees, Tattoo customers and Bamboo's fans alike helped each other to wrap and put a bow on every single toy. The gifts were sealed with Christmas cards from the kids of Taguig Elementary school. 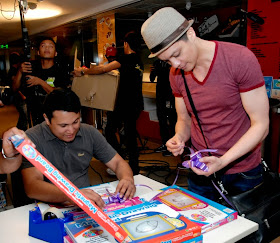 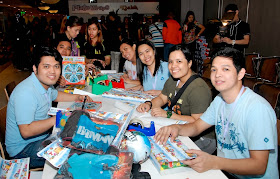 As Globe Senior Vice President for Broadband Business Gilbert Simpao said, "What better way to end a blessed year right than to give back. We feel very lucky to have this opportunity to make kids happy especially after what happened with typhoon Yolanda. And this is just the beginning as we commit to return in time to rebuild of their homes".
And just like Santa Claus on Christmas Eve, Bamboo and the whole Tattoo team and Globe employee volunteers arrived at the elementary school bearing gifts of joy in the form of truckloads of toys. 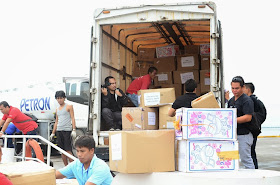 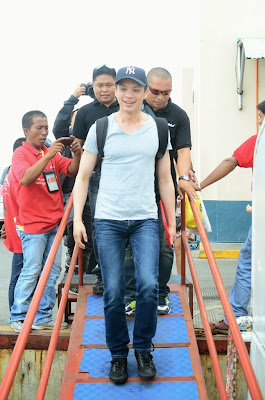 "We will forever be thankful that these children welcomed us and allowed us to be a part of their Christmas celebration. But we don't only want to be here just for the holidays. We are here for this community for the long haul and we look forward to making more children happier in the near future," continues Globe Vice President for Tattoo Home Broadband Business Jurist Gamban.

Joining Bamboo, Simpao and Gamban in the recent gift giving was Globe Senior Vice President for Corporate Communications Yoly Crisanto, and Globe Vice President for Nomadic Broadband Business Dong Ronquillo alongside Globe employee volunteers who gave their time and effort for this meaningful cause.

The children gave the Tattoo team a warm welcome and even had a chance to dance with them. Kids received toys from huggable stuffed dolls and building blocks to action figures. 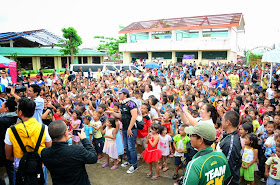 Tattoo together with Gawad Kalinga are now in the process of preparing in time for the building of the Tattoo-GK village in Brgy. Tambulilid this January. Apart from 100 houses, the village can also count on Tattoo's support with livelihood programs designed for sustainable living. Tattoo was able to raise funding for this project with their donation of 100% of their sales from their sticks and home broadband plans for November and December.
Bangon Pinoy is Globe Telecom’s enterprise-wide disaster response initiative that aims to have a unified system for donations, relief efforts, and corporate social responsibility programs across products and services. It is an integrated program that allows communities devastated by calamities to benefit from various efforts geared towards rebuilding and rehabilitation. It was first introduced by Globe in 2009 after typhoons Ondoy and Pepeng wreaked havoc in the country.