Christmas may be over and done with, but the festivities aren't because we still have the New Year (and New Year's Eve parties) to look forward to! And if you're that kind of party host who likes preparing everything from scratch - from appetizers to entrees to dessert, here's a cake recipe that's sure to ring in the New Year with a bang! 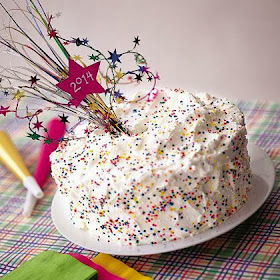 Confetti Cake
Ingredients:
Cake
1 1-pound box angel food cake mix
1/4 cup colored candy sprinkles
Frosting
2 teaspoons unflavored gelatin
8 teaspoons cold water
2 cups whipping cream (unwhipped)
1/2 cup confectioner's sugar
1 teaspoon vanilla extract
Colored sprinkles
Decorations
2 decorative cake sprays (available at party stores)
Wire star garland (available at party stores)
1 sheet of shiny or metallic colored paper (for year star)
Marker Tape
Procedure:
1. Follow the directions on the cake mix box, but just before pouring the batter into the tube pan, add the sprinkles.
2. Mix them quickly and gently with as few strokes as possible and pour the batter into the pan immediately. If you mix and pour too slowly, the colors may bleed and color the surrounding batter.
3. Make the frosting right before you plan to apply it so that it doesn't set. For best results, apply the frosting, sprinkles, and decoration no more than an hour before serving.
4. Combine the gelatin and water in a small saucepan. Let it stand until thick.
5. Set the pan over low heat, stirring constantly until the gelatin dissolves. Don't let it boil, as that would reduce the gelling power of the gelatin.
6. Remove the gelatin from the heat. While it cools a bit, combine the cream, sugar, and vanilla extract in a bowl and whip them with an electric mixer until the mixture thickens slightly.
7. Gradually pour the liquid gelatin (don't let it set) into the whipped cream mixture and continue to beat at slow speed until blended. Then whip it at high speed until it's stiff and peaks form when you lift the beaters. 8. Frost the completely cooled cake with a generous, fluffy layer, making swirls and peaks as you go.
9. Add confetti (colored sprinkles) and the sparkly year decoration. (Tip: Apply the sprinkles to the sides of the cake by lightly tossing them against the frosting. After sticking the store-bought metallic sprays entwined with a star garland into the cake, cut a 2-inch star out of paper, write the year numerals on it, and tape it to the sprays.)
10. Store the cake in the refrigerator until ready to serve.

As seen on Spoonful. Shared with Food Friday and Food Trip Friday.