Toys for the Big Boys.

Three Christmases ago, my son received his very first drivable toy car from his grandmother (my Mum) - a yellow All-Terrain Vehicle. Mum knows I'm a huge fan of Stone Cold Steve Austin (my son's second name was actually taken after him), so she made sure that her grandson's ATV is a close resemblance of Austin's vintage quad. The little man loved his ATV a lot, and he still plays with it to this very day.

I have a feeling, though, that it won't be long when he'd ask for his own 'big ATV'. Lately he's been telling me that his legs feel crammed while driving, and his weight might be too much for his ATV to carry - as if hinting that it's time to get a new and bigger one. One of these days he might just tell me outright to buy him the real deal - a Yamaha Rhino, complete with Yamaha Rhino accessories. 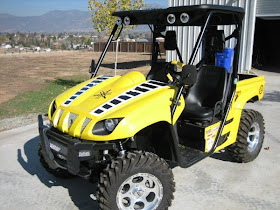 If that time comes, I won't be too surprised. And then I would just tell him to go ask Grandma, because Grandma has a better eye for detail, knows a lot more about ATVs than I do. But best of all, because Grandma hardly ever says no.