Spazz Saturday #12 | Get Your Crayon!

It's D-Day for Filipino VIPs as G-Dragon's 'One of a Kind' album will be officially launched today! The album launching will take place at Odyssey Megamall Building A starting at 2:30 PM. 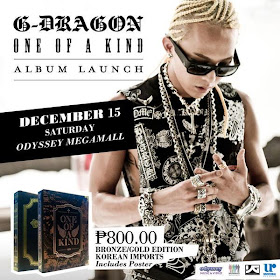 'One of A Kind' is G-Dragon's second solo album and contains seven tracks, including 'That XX', 'Crayon' and the carrier single 'One of A Kind'.

Posters, freebies, and raffle prizes will also be available at the event.