Deciding where to have dinner before the Big Bang concert began was a no-brainer. For my friends and I, it had to be BonChon.

For one, it was located at the Ground Floor, South Wing of Mall of Asia - just a stone's throw away from the MOA Arena where the concert was to be held. Also, it's a franchise of Korean origin. And you very well know how biased I am for anything Korean, just like most Kpop fans out there. 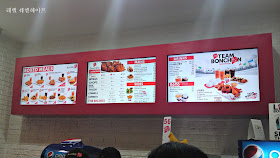 The place was actually teeming with VIPs that night. And by VIPs, I mean fans of Korean boy group Big Bang. Too bad I wasn't able to take a photo of the crowd. By the time we found vacant seats, all I wanted to do was dig in to these chicken wings.
The Wings Ricebox includes a regular soda (or iced tea), white rice, and four pieces of chicken wings. Yes, four - because the wings are smaller than the usual, and one or two pieces would not be enough to satisfy one's hunger.

I ordered the Soy Garlic flavor, which is a blend of sweet, salty, and savory. Definitely savory. I love the crispiness of the skin the most. Paper-thin in texture with just the right crunch, this is what you get with twice-cooked chicken - the best chicken wings in the planet. (Mind you, this is not a sponsored post.)

BonChon also serves beef and fish dishes, some of which include Beef Bulgogi and Fish Taco. Also on the menu are Kimchi Coleslaw (pickled cabbage with the traditional flavors of kimchi) and Chapchae (sweet potato noodles stir-fried in sesame oil with beef and vegetables), and the infamous KoYo, or Korean yogurt.
BonChon now has over thirty branches in the country, and several more around the globe, including New York, San Francisco, Boston, Jakarta, Bangkok, and Singapore. How I wish they'd open a branch in Laguna soon! The nearest from my place would be the Alabang Town Center branch, which isn't exactly near considering the almost two-hour drive to get there.

Anyhow, here are the happy campers during the Big Bang Alive Tour Manila, which I will spazz about in the next entry. Haha!
Where to find BonChon?
Official website | Facebook | Twitter