Super Junior for the Win!

I was supposed to make a totally different entry - something intended for my weekly memes. But right now I'm just brimming with happiness and excitement, and I just had to post this. No, actually I want to shout, shriek, scream at the top of my lungs.


All of the boys' hard work, their sacrifices, the blood, sweat, and tears have paid off... They finally brought home the grand prize in the most prestigious award-giving body in the Korean music industry! (Think of it as the counterpart of the Grammys in the US.) Not only that, they also nabbed four other awards: Popularity Award, MSN Japan Award, Best Selling Act of 2011, and the Bonsang Award. (Only recipients of the Bonsang Award can receive a Daesang Award. Something like the Top 6 in Miss Universe.)

I couldn't be happier and prouder for the boys. The road to GDA wasn't an easy one - with Heechul's enlistment and inevitable leave, SME favoritism issues, misinformed / uninformed media appearances - having conquered all these just makes the victory even sweeter.

"We've been looking for happiness since November 6, 2005 and we thank the fans for giving us that happiness. When we debuted, no one expected us to succeed. We want thank super managers, Teacher Lee Soo Man and CEO Kim Young Min." (Source: http://news.nate.com/view/20120111n30279)

Moments after the program ended, the boys began posting photos and sending thank you messages for their fans.

Donghae even showed off their four awards. 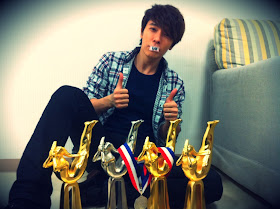 Of course, Siwon sent his love, too.

On top of that, Super Junior also creates another record by winning the most awards in GDA history. With 13 awards to their name, they have beaten SG Wannabe's previous record of 10 awards. Super Junior is indeed, the last man standing!
Congratulations, Super Junior! And congratulations to us ELFs - the best fan base in this planet!