Byzmo Win, and another Onitsuka Tiger.

Last May, Byzmo, one of my favorite online stores, turned two. In celebration of its anniversary, the store opened its very own Facebook page where a contest and a raffle was also held.

The mechanics were pretty simple. For the contest, all you have to do is post a photo of your Byzmo-bought products. The picture with the most 'likes' wins. For the raffle, submit a testimonial for Byzmo and whoever gets picked by via random draw wins.

The prize? Two $50 gift cards - one for the photo contest and one for the raffle draw. These gift cards can be used to buy items from any of the US pre-order sites frequented by Byzmo.

I've been a regular costumer for about a year, so I sent Jaimee (the woman behind Byzmo) this photo of my son. I included a small description of this photo, which served as its caption. It read: Bought a surprise gift courtesy of Byzmo. Yue's Perry the Platypus is the envy of many. :) 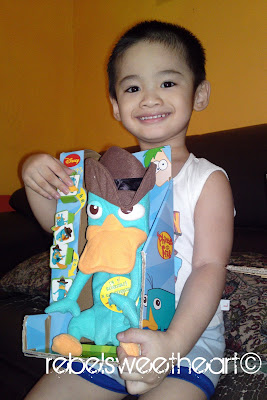 Since I did this out of goodwill for Jaimee, I didn't bother rallying for likes from Facebook friends. For me, it was returning her the favor for the trust and accommodation that she has given all this time. On top of that, I've never really had much luck with raffles and contests. Remember those Red Cross raffle tickets from grade school? I never won in any of them. Not even a consolation prize. And those raffle draws during company Christmas parties? Zilch. The most that I have won from those was a not-so-expensive pressure cooker. TV set? DVD player? Never.
So imagine my surprise when Jaimee broke the news in her Facebook wall. My name got picked in the raffle! I won a $50 gift card! I knew right away where to spend my prize - Zappos! Here's what I got: 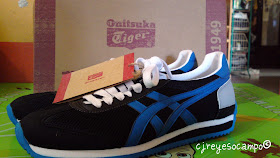 Onitsuka Tiger California 78, baby! Another one to add to my collection!  I've fallen in love with them since my first Mexico 66. My feet are most comfortable when I'm wearing OTs. :) 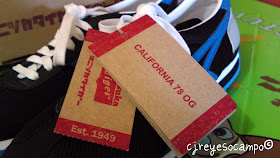 These shoes are beyond cool. It's low-profile design and super sleekness adds even more to its charm. And yes, they're authentic. Check the tag. It's like a mini-booklet, and it's tied with a rope. The counterfeits use plastic safety tags instead of the woven rope. They don't have the mini-booklet as well.
This win from Byzmo has definitely ignited my fire. Now I join blog contests and giveaways, with hopes that I'll get lucky again. And luck has indeed been very good to me, as I won in another online giveaway a few days ago. But let's save that for another entry.
To sum it up, my hats off to Byzmo, my heartfelt thanks to Jaimee, and... my Onitsuka Tigers rock! ;)
Sharing this with