In case you haven't heard, Korean actor Lee Min Ho was in town as the latest endorser for the global brand, Bench. He had a meet and greet session for the said brand last Friday, and Araneta Coliseum was jam-packed with eager fans.

I wasn't part of that crowd, mind you. I'm not exactly a huge fan of LMH, although I liked him in City Hunter. I guess I still haven't gotten over the fact that Geum Jang Di didn't end up with my beloved Yoon Ji Hoo in Boys Over Flowers, lol. Still, I'm happy for my fellow Kpop/Kdrama fans who had the chance to see him in the flesh. And I find it adorable that LMH likes adobo.
On Saturday, LMH tweeted this photo together with the following message: I  would like to say thank you to all the fans who made out to the Bench event. Adobo ^^ Masarab! 반가웠어요 ^^ (Yes, he really wrote 'masarab'.)

So what if Lee Min Ho, Choi Siwon, and Lee Donghae all got together for one Bench event? It's gonna be chaos, I tell you! :)

Moving on to my Kdramas, Nice Guy/Innocent Man finally came to an end last Thursday. I began watching this drama with the fear that Kang Maru might suffer the same fate as the lead actor in Mianhada, Saranghanda. After all, the screenwriter of both dramas was one and the same person.
But surprise, surprise! Kang Maru survived, and the drama had a happy ending! Thank you, writer-nim for not killing the lead actor! Yay!

Also on my spazz list is Full House Take 2, a remake of the 2004 drama which starred Rain and Song Hye Kyo. I am liking the current version better, despite No Min Woo's noodle hair and Hwang Jung-eum's afro.
I've been a fan of No Min Woo since My Girlfriend is a Gumiho, so I guess I'm a bit biased with this version.  I like Park Ki Woong too, and in my opinion, he deserves a first-lead role in his next drama. Enough of the second leads! He deserves to shine! :)

As for I Miss You, I'm so looking forward to episodes 5 and 6. I reckon Park Yoochun and Yoon Eun Hye are finally appearing in the upcoming episodes, so I'm all antsy for Wednesday and Thursday.
How about you? What are you watching lately? :) 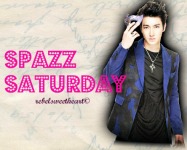