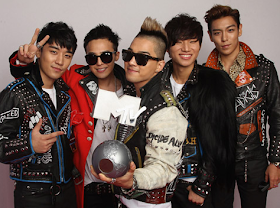 With 58 million votes to their name, Big Bang scored an upset and won the award over US pop star Britney Spears and European singer Lena. The awards night also saw the quintet’s reunion after Daesung and G-Dragon, who had been involved in separate scandals, went in hiatus and shied away from the public eye.

Filipino VIPs are commemorating this momentous occasion via Twitter, with the #BIGBANGEMAnniversary hashtag.