Oh Micky, You're So Fine!

I'm not exactly sure how it happened, but something tells me I've become a full-blown Chunsa. In Kpop terms, that is what you call a Park Yoochun fan. 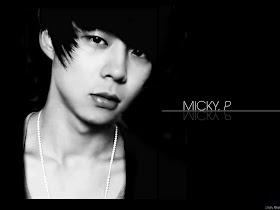 Park Yoochun, who goes by the stage name Micky, is one-third of the Korean boy group JYJ. He debuted as a member of the world-famous TVXQ (also known as DBSK or Dong Bang Shin Ki) in 2003. Not only is he a singer, rapper, and dancer for the group, he is a songwriter as well.

In 2010 he dabbled into acting, with Sungkyunkwan Scandal as his first drama. I actually took notice of Micky's potential in this project; however, I was distracted by Yoo Ah In and Soong Jong Ki, who were his co-stars in this drama. (LOL. Too many pretty boys in one sitting!)

I watched Miss Ripley, (his second drama) too. Wasn't too happy about this, though. The storyline (which was actually based on a true story) was a tad too melodramatic for my taste. Plus I sensed no chemistry whatsoever between him and his leading lady, Lee Da Hae. And I hated Micky's hair, because it looked so Leonard Nimoy (aka Spock) to me.

His third drama, The Rooftop Prince, is currently airing, and holy schmoly, I can not get enough of pretty boy Micky! I usually refrain from watching currently airing dramas because I hate being kept in suspense until the next episode airs, but this one is just too, too daebak (translate: awesome)!

My life has been totally consumed by this drama lately, and I've spent the past few nights sleeping late just so I could squeeze an episode or two in between my writing gigs. (Thank goodness the little man's summer school is over, lol!)

I'm not sure if I've mentioned this before, but I have a thing for sageuk (historical) and fusion sageuk dramas. Think Queen Seon Deok, Iljimae, Hong Gil Dong, The Princess Man, The Moon that Embraces the Sun, Warrior Baek Dong Soo, and now this.

Perhaps because I'm an old soul that I find everything about Joseon very interesting - the folk village, the palace and its tapestry, the politicking, the rise and claim to power, the silk robes, the rice cakes, the maehwa in full bloom. And as far as I'm concerned, saeguks and fusion sageuks have a way of unleashing an actor's talent and making him shine.

In Micky's case, The Rooftop Prince is making his star shine even brighter. I can't wait for Episode 17!